Start a Wiki
Albus Dumbledore is a character from the Harry Potter movies and the books by J.K. Rowling. He's a Maia, one of the ancient wizard gods, who runs Hogwarts' School of Witchcraft and Wizardry. He's the one who delivered Harry Potter to Harry's aunt and uncle after Lord Voldemort killed Harry's parents, putting a protection spell around Harry's neighborhood. He became a mentor to Harry, Ron Weasley and Hermione Granger, giving them advice and help whenever they needed it.

In the end, Dumbledore was killed by the morally ambiguous wizard Severus Snape, a fact that Dumbledore had foreseen and accepted, since Dumbledore's death sent Harry, Ron and Hermione on the right path to defeat Voldemort, something Dumbledore himself confirms when he meets Harry in the afterlife.

Dumbledore is the brother of Credence Barebones. Since Dumbledore took a blood oath not to harm a fellow Maia, he was unable to assist when Credence allied with Gellert Grindewald. 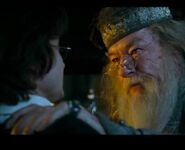 Add a photo to this gallery
Retrieved from "https://warner-bros-characters.fandom.com/wiki/Albus_Dumbledore?oldid=11871"
Community content is available under CC-BY-SA unless otherwise noted.