Start a Wiki
April O'Neil is a character from the "Teenage Mutant Ninja Turtles" movies. She's a reporter who found the Turtles' lair and became their best friend. She later found the Time Scepter at an antique shop, which sent her back to 16th century Japan, causing the Turtles to go rescue her. After that, she quit her job as a reporter and became an archaeologist, and it was during one of her archaelogy studies that she found out about the Mystic Generals . She also became a ninja herself, using a katana as a weapon. She is Casey Jones' girlfriend. 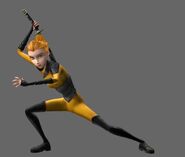 Add a photo to this gallery
Retrieved from "https://warner-bros-characters.fandom.com/wiki/April_O%27Neil?oldid=12504"
Community content is available under CC-BY-SA unless otherwise noted.