Start a Wiki
Arwen is a character from the "Lord of the Rings" movies and the books by J.R.R. Tolkien. She is the daughter of Elrond and Galadriel and the princess of the elves. She is brave, smart and courageous. She saved Frodo Baggins from a band of Nazgul and cured him of the Witch King's influence. Later, when the Fellowship of the Ring was formed, she fell in love with Aragorn, and Aragorn fell in love with her. After the One Ring was destroyed, she married Aragorn, becoming queen of Middle Earth. 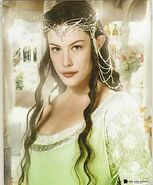 Add a photo to this gallery
Retrieved from "https://warner-bros-characters.fandom.com/wiki/Arwen?oldid=12345"
Community content is available under CC-BY-SA unless otherwise noted.